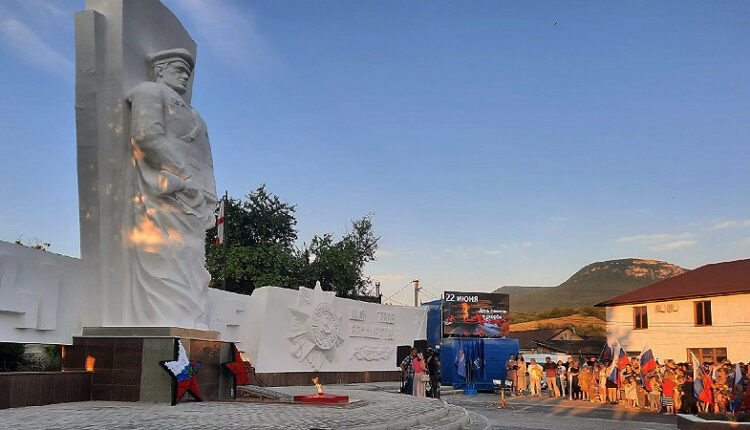 On the eve of the mournful and mourning date — June — the day of the beginning of the Great Patriotic War in the village of Aroma, Bakhchisaray district, monument «Common grave of Soviet soldiers», restored on the initiative of the Chairman of the State Council of the Republic of Crimea Vladimir Konstantinov.

In the restoration of the monument where the remains 16 of Soviet soldiers who died in 810 year, during the liberation of the peninsula from the Nazi invaders, about a hundred people took part: deputies of the Crimean parliament, municipal authorities, entrepreneurs, philanthropists, social activists.

Restoration of memorials and monuments dedicated to the events of the Great Patriotic War is a matter that is carried out not according to instructions, but at the call of the heart , said Vladimir Konstantinov, thanking all the participants in the project.

The opening of the monument, he noted, is no coincidence timed to coincide with the start of the Great Patriotic War, «this is another reason to recall how important the memory of those distant events is.» Vladimir Konstantinov is sure that “the realities of today, when a special military operation is being carried out to denazify and demilitarize Ukraine, once again prove how important this memory is in order to prevent the revival and spread of the criminal Nazi ideology.

The Head of the State Council of the Republic handed over the Order of Courage to the son of the Guards Sergeant 810 of the Guards Order of Zhukov of the Separate Brigade of the Marine Corps of the city of Sevastopol, a native of Bakhchisaray, who died during a special military operation Yury Sinkevich.

Find out more:  In the Crimea, the road workers took up the bridge on the road "Soviet - Prudy - Zybino"

Those present honored the memory of the fallen soldiers with a moment of silence and set up lit lamps at the Mass Grave.

REFERENCE: In April 1944 the troops of the 4th Ukrainian Front carried out an operation to destroy the Crimean group of Nazi troops. The settlements of the Belbek Valley were liberated by the soldiers of the 385 th Infantry and 1260 th anti-aircraft artillery regiment of the Separate Primorsky Army. Those who died in battle and died of wounds in the 491-th surgical mobile hospital 56 Soviet soldiers were buried in various settlements of the Belbek Valley. In 1950 the reburial of their remains was carried out in a mass grave on the outskirts of the Bakhchisaray village of Aroma. The names 16 of the fighters are still unknown.

Landscaping of Simferopol: tens of thousands of flowers, new flowerbeds and ampelous compositions