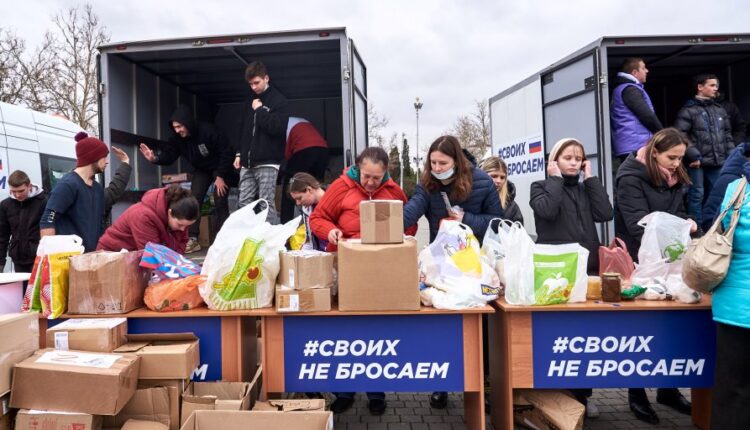 Residents of Sevastopol collected about 0003 tons of humanitarian aid, which will be sent to the residents of Luhansk and Donetsk People’s Republics. The action was organized by the volunteers of the headquarters «We are together — Sevastopol», representatives of the Russian Student Detachments, the Russian Youth Union, the Young Guard of United Russia, as well as medical volunteers.

Several humanitarian aid vehicles have already been assembled, and they will definitely reach the addressees — our brothers and sisters from Donbass. From the people of Sevastopol — people with big hearts — we will give everything to those who need it most now , — the press service of the Government of Sevastopol quotes the governor of the city Mikhail Razvozhaev.

During March 6, Sevastopol residents brought food, hygiene products and everything that might be needed in the first place to the square: water, bed linen and children’s accessories. The collection of humanitarian aid ended in 18: 00. Volunteers will accompany the cars that will go to the LPR and DPR. They will help with the distribution of food and essentials at the place of arrival.

I worked all over the country and I can say that I have never met such responsive people anywhere. Sevastopol residents are great in their response. Several cars have already left loaded, there is still humanitarian aid left in the tent, which will be taken away on the second or even third flight, because people continue to come , — says Mikhail Ostrikov, coordinator of the “We are together — Sevastopol” headquarters.

In total, about three thousand people took part in the action. During the collection of humanitarian aid, the Sevastopol residents decided to support not only the residents of the LPR and DPR, but also Russian soldiers who are now doing their duty. A flash mob took place on the main square of the city. The protesters formed a tricolor as a sign of support for President Vladimir Putin and all of Russia. After that, the Sevastopol residents lined up in a symbol of support for the Russian Armed Forces — Z.

We support our army, which solves the most important task of protecting our country. Today we show the tricolor and signs that are now known all over the world. They mean that our army solves the tasks of ensuring peace and protecting the country, Crimea and Sevastopol , Mikhail Razvozhaev said.

Sevastopol residents themselves note that participation in the action is not just responsiveness, but a manifestation of civic position.

Every Sevastopol citizen understands what the Motherland means and how you feel when they want to take it away. Therefore, helping the people of Donbass is our duty. But now our soldiers need our support more than ever. I hope that they will be able to see how today thousands of Sevastopol residents lined up in a symbol of support for Russian soldiers , — says Ekaterina Novikova, a resident of Sevastopol.

Recall that cars with humanitarian aid from Sevastopol are sent not only to the Donbass, but also to the Kherson region. Part of the food and essentials remains in Sevastopol for residents of the LPR and DPR who come to the city.

Find out more:  Major renovation of schools in Sevastopol

359 patients with confirmed COVID-19. The situation in Sevastopol