The southern coast of Crimea was covered with snow. How road workers coped with ice 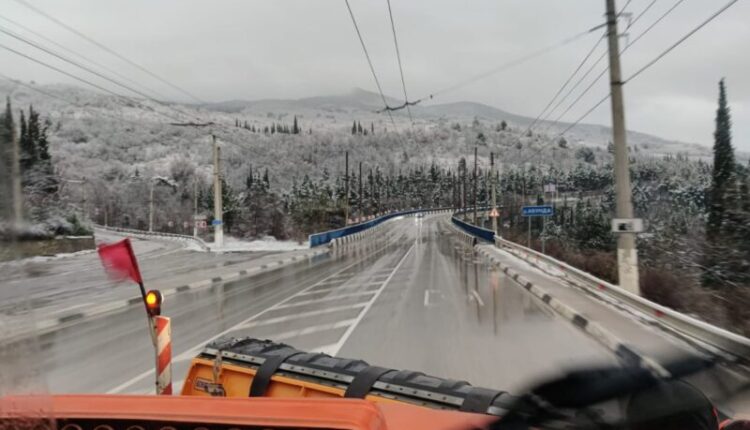 Looking for snow over the weekend? He himself was found — on Ai-Petri and the Angarsk pass, but not only, but also, practically, on the entire southern coast of Crimea — from Alushta to Katsiveli.

As Yanina Pavlenko, head of the administration of Yalta, aptly commented on the situation, the weather gave us a small “rehearsal” of actions during snowfalls. Did the road builders make it? Well … let’s say, for the «four».

I would like to thank the specialists of the Yalta branch of the State Unitary Enterprise of the Republic of Crimea “Krymavtodor” and the MBU “Daewoo” for the efficiency and coordination. This time, special attention was paid to Gaspra and Stroygorodok, Krasnokamenka, Gorny and Vysokogorny, the road to Ai-Petri , — Pavlenko noted.

According to her, road services used 58 tons (!) of anti-icing mixture and 100 tons (!) of salt. The situation was promptly monitored, including through driver chats, and they immediately responded.

Over the past weekend, the branches «Alushta DRSU», «Yalta DEU», «Bakhchisaray DRSU», «Saki DRSU», «Simferopol DRSU 1» worked in an enhanced mode — in order to avoid the formation of emergencies and emergency situations, measures for clearing and backfilling the roadway with a sand-salt mixture, the road workers used about 450 tons of anti-icing mixture , — reported in the State Unitary Enterprise of the Republic of Crimea «Krymatodor».

Road builders note: winter in Crimea is “a fickle lady”: after a sharp cold snap, it is warming again. Nevertheless, monitoring of the state of the roadway (especially in the mountains) continues.

367107Photo: Ya.Pavlenko’s Telegram channel and VKontakte page of the State Unitary Enterprise of the Republic of Crimea «Krymavtodor».

Morning accident on the Yalta-Sevastopol highway: a passenger car crashed into an excavator