Sergei Aksyonov: work to assist refugees in Crimea is organized in all areas 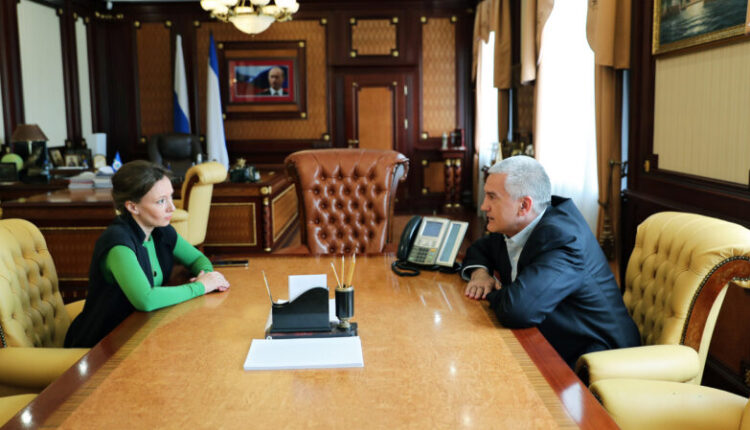 Head of the Republic of Crimea Sergei Aksyonov held a working meeting with Deputy Chairman of the State Duma of the Federal Assembly of the Russian Federation, Deputy Secretary of the General Council of the United Russia party Anna Kuznetsova. During the meeting, issues of providing humanitarian assistance to refugees from the Donetsk and Lugansk People’s Republics and adjacent regions of Ukraine, as well as preparations for the holiday season in Crimea were discussed. So, according to Sergei Aksyonov, practical work with internally displaced persons — to provide assistance to refugees — in the Republic of Crimea is organized in full in all areas.

In Crimea, all necessary measures are being taken to help people arriving from neighboring territories. Despite the difficulties caused by the large number of refugees, assistance is provided to the maximum number of people. The instructions of the President in terms of payments by federal and other authorized bodies are carried out in full, as is the provision of assistance to arriving citizens in medical institutions of the republic , the press service quotes the Head of Crimea.

Sergey Aksyonov also said that, on behalf of the President, work is underway in the Republic of Crimea to provide the residents of adjacent territories, including Kherson and Zaporozhye regions, with the necessary resources and energy sources.

During the discussion of preparations for the holiday season, Sergey Aksyonov noted the objective logistical problems of organizing the tourist flow that arose in connection with the partial closure of air traffic in the Southern Federal District.

Each accommodation facility develops its own supply chain. Basically, airports in Mineralnye Vody and Stavropol are used, with further transfer to Kerch or Simferopol by road or rail. However, despite certain difficulties, the holiday season will take place. Therefore, our main task, together with the federal authorities, is to jointly ensure the safety of residents and guests of the peninsula , the Head of the Republic notes.

In turn, Anna Kuznetsova noted that in the Republic of Crimea all emerging humanitarian issues are successfully and promptly resolved and the tasks set by the President are being fulfilled.

Now children, families with children come to the region from all over the country for summer holidays. At the same time, the issues of accommodation of refugees are being solved. This is a big load. And of course, it is necessary to provide support to the republic, make every effort to resolve both logistical and other emerging issues , the Vice-Speaker of the State Duma emphasized.

Find out more:  KFU is working on the revival of the seed fund

33 cases of new coronavirus infection per day. Covid-19 in Crimea

Head of Crimea: «For eight years now, the people of the Luhansk region have been defending their choice and their freedom.» LPR celebrates Republic Day